Microclimates in Your Garden – Keeping Track of Rainfall 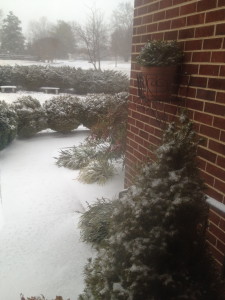 Snow and wind on the North side of my garden.

I am dreaming of Spring in the garden while I’m writing this blog. We are in the midst of a snowstorm, which is at the leading edge of another blast of extreme cold called the “Polar Vortex”. Not my favorite time for being outside! There are many “official” weather collecting stations in the D.C. metro area, but they all seem to vary widely compared to what I witness right here.  We can be in the clear, and just nine miles north at National Airport (where the Weather Service collects the official Washington, D.C. data), it can be pouring. So, last year I decided to keep track of the snow/rainfall in my own garden to compare.

The National Weather Service reported 44.24″ of annual rain/snow at National Airport for 2013, and 45.34″ at Dulles — surprisingly similar totals. However, I recorded 76.75″ in my own garden — wow, what a difference! Maybe it’s because so many storms hit us from the south. Or maybe it’s because the Potomac is wider where we live. Or maybe it’s just luck. Clearly, we have very distinct micro-climates throughout our region.

Here were my monthly rain totals for 2013. Our only low rainfall months were August and September, which caused a mini-drought. 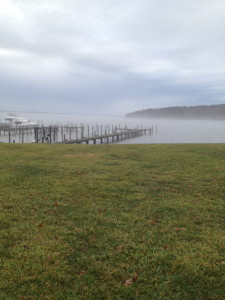 Lots of strong storms
from the south and west this last year bumped up the annual rainfall total, and kept the garden green much longer into the late summer than usual.

It’s easy to keep track of the rain in your own yard. I use a rain gauge with the measuring guide on it, but really, any glass with straight sides will do. Kind of fun and interesting in a geeky sort of way!

If we had 1″ of rain each week, that would be perfect. While we usually don’t receive that much rain, it was nice not to have to water so often in 2013. I will keep track again this year to see what differences a year can make. Let’s see if Mother Nature will help us keep green in 2014!