Just Say No! Springtime Don’ts and How To Fix Them 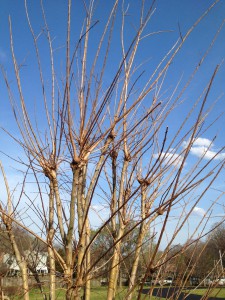 An example of a stump cut dormant Crepe Myrtle. When this is done year after year you end up with a deformed looking tree that is prone to wind damage when in bloom.

I don’t usually start off a blog in such a negative way, but there are certain practices out there which need to be stopped, and many of these occur in the spring. I recently have seen many timely articles about the annual ritual of hacking off the top half of Crepe Myrtle trees. One in particular hit the nail on the head, titling it “Crepe Murder.” This practice involves stump cutting the entire tree down to a certain height. It is very unattractive and unnatural-looking when the foliage is gone, namely all winter, and when done year after year, you end up with knobby branches. To me, this sort of looks like the painful joints of an arthritic person. I have seen many pear trees mutilated in the same way. Many people do this because they see paid gardeners do this and unsuspectingly think it’s the right thing to do.

Tip — The proper way to keep a Crepe Myrtle trimmed is to cut the branches at the base of the branch, just like you do for most other plants. This will maintain the proper branching structure and keep it natural. 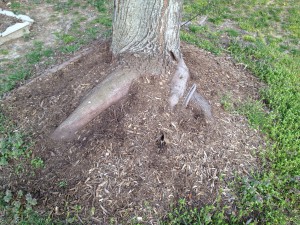 This is what happens to trees which have had the mulch piled too high, "mulch volcano" style. The roots are struggling to receive water and nutrients growing toward the surface, instead of downward where they are needed for stability.

Another really bad practice that I would like to caution against is the “Mulch Volcano.” This is when the mulch is piled really high around the base of a tree with a dip in the center where the trunk comes out from the dirt. Many so called “professional” gardening crews do this as a standard practice, and so again many gardeners follow suit, thinking it is correct. In fact, it will actually kill the tree, choking off all rain and nutrients from ever reaching the poor root system.  The example to the right shows what happens to them if they don’t die. Notice how the roots will try to grow upwards to the surface in order to reach moisture. This can cause a host of new issues to deal with, such as the roots protruding out of the dirt compromising their stability, and causing them to be easily harmed during mowing. Also, it makes the roots easy to trip over if you are walking under the tree.

Another item that I would like to caution about is spraying weed killer. If it is not a completely windless day, the mist can carry quite a distance killing everything along the way. The best tip I have come across is to dip a sponge in the herbicide and lightly touch it to the weeds you want taken out. For a large area, such as killing the grass for a new garden bed, apply it with a paint roller. Quick and easy! 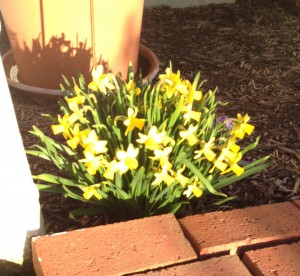 When daffodils and other bulbs have finished blooming, deadhead the spent blooms but leave the foliage for at least a month before cutting it down. This will ensure a beautiful and healthy display the following Spring.

One more quick don’t- when your daffodils and other bulbs have finished blooming for the season, don’t cut the foliage to the ground just yet. Go ahead and remove the dried up blooms, but leave the foliage until the green color fades. This is how the bulb replenishes itself with nutrients for the following spring, so it’s important to allow the leaves to soak in the rain and sun for an extra month or so.

Where's the snow? This year we have not had this scene at all.

It’s official: the USDA has changed our climate chart once again. This was done because the average low temperatures have increased, resulting in many regions in the U.S. changing their growing zones. Unlike previous changes, this data was compiled over 30 years. The new map can be viewed at: http://planthardiness.ars.usda.gov/PHZMWeb/ 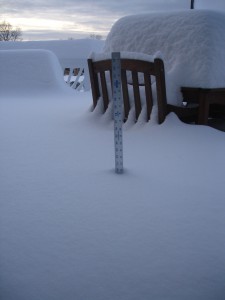 This was just two winters ago. At one point we had two feet of snow which lasted for a month.

My area is now squarely in the “Upper 7” range. I have noticed that many of the plants which used to be marginal in my yard have not had much winter die-back this year. This is very recent though, and I am not convinced we have really changed that much, since we had an incredibly snowy and frigid winter just two years ago.

This season the rosemary, oregano, sage and lemon balm remained thriving in my herb garden all winter, and the chives were only dormant for a couple of weeks. In the past, I would have been without fresh herbs for at least a couple of months. Here is a tip you can try which can extend the growing time quite a bit: Place a terracotta pot over the herb during cold nights. The pot will hold enough warmth to keep the herb from freezing, while allowing excess moisture to escape. I once kept cilantro (which is very tender) growing for two months this way, even in the snow! 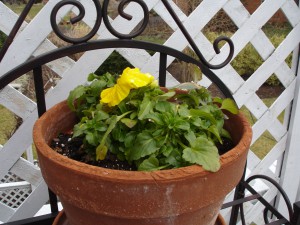 This is the first time we have had flowers on the pansies all winter long.

I am already seeing lots of new growth on the ornamental grasses which I just finished trimming back. Tip: After you have trimmed them down, rake through them with gloved hands (heavy duty gloves — I don’t want anyone getting cuts!). This will help remove the dead leaves and debris which if left behind, can make its way into the crown of the plant, choking the new growth.

The pansies which I planted last fall have been blooming all winter. Normally, they would have died back to the ground and re-sprouted new growth just this month. I am also seeing the strawberry plants sending out new leaves. It will only be a short time now until we have some on our plates, barring any late season storms. 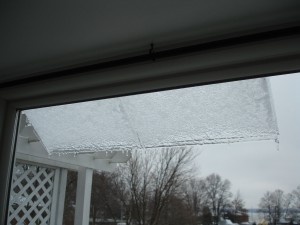 If we do get an ice storm remember that falling ice can be very harmful to humans and plants alike, If you get falling sheets of ice, like I do, make sure that you block the area where they fall.

I hate to sound selfish, but I do love the milder weather this year so far. I am much farther along with my usual winter gardening this season. Tip: We are now at the correct time of year to apply a crabgrass preventer on the lawn. It can be applied anytime between February and April, but must be down before any 80 degree days to create a barrier.

In years past, when we have had mild winter weather, we would be in for a really wet spring, often with ice storms. We will see! It is always something different around here.

Until then, you know where you can find me — I’ll be out in the garden!